It's a Good Life Damn Right 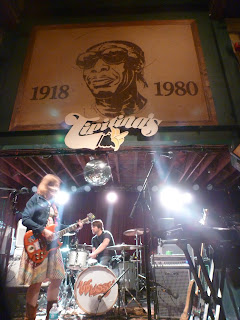 Posted by Mr. Loudpants at 8:11 PM No comments: 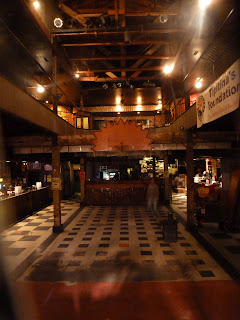 That's a basketball hoop right in front of you.
Posted by Mr. Loudpants at 8:10 PM No comments: 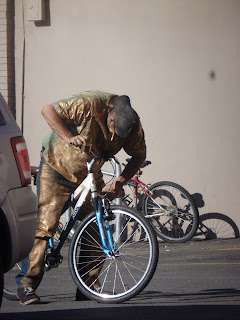 I watched this guy spraying himself with gold paint while smoking a cigarette. Presumably getting ready to go to work.
Posted by Mr. Loudpants at 8:08 PM No comments:

It’s been a month since these shows. I’m pissed that I’m writing after the moment. Steinbeck wrote, “Travels With Charley” long after he got back but I’m pretty sure that has no relevance here. Regardless, I’m realizing what a luxury our summer tour was. And for the record everything, except Lisa and Rene seeing a roadrunner, that pissed me off has faded and I have only romantic, epic memories left. All that time to write and no real life to intrude. As soon as I got back from this one I was sick for the requisite week, and then back to keeping my head above water. I guess it just proves how little time we allow ourselves. Anyway now back to our regularly scheduled broadcast. I will finish this tour, it just may take awhile.

Tipitinas is a flat out legendary club in a warehouse district right within view of the dike separating us from the Mississippi. This kind of tour was a new experience for the band, if not Chuck and John exactly. (Throwing Muses tour in the ‘90s) When we got there the Whigs were done with their soundcheck, so we could load-in and head up onstage. It was a pretty small stage all told, and here’s the thing about being an opening band: all their gear is still onstage except maybe the pedals that might line the front of the stage. It’s kind of like sneaking your girlfriend into your buddies house because his parents are out for the evening watching Andrew Lloyd Webber’s “The Phantom of the Opera,” (with Justine Bateman and Lorenzo Llamas in the lead) and you want to be impressive in the hopes of boob touching but in no way fuck anything up in the house so you don’t get busted. I’m going to spend this tour stage left right next to the Whigs keyboard set-up, and I live in fear of messing up any of the million pedals and cables snaking everywhere. Add to this their tour manager spends the night yelling at us. (By the end of the tour we will be BFF’s and all, but tonight we’re new to the pack and it is necessary to let us know who gets to sniff whose butt and who had better like it) It’s also the first night where we get to have a rider. (the wish list you give to clubs) Our rider has things like towels (for Chuck), tea (for Lisa), beer (for Joe, me, and Rene), and a fresh fleshlight for John. And tonight we got it! Well except they put all our stuff into the Whigs dressing room. The Whigs don’t really use their dressing rooms much, (they have a bus) but people wander in and out. They also had bags of PopChips, which I love, and chocolate. Thus began the fine tradition of sneaking into their dressing room and helping ourselves to our things, and maybe a few of theirs, but once again not enough to get busted. We would offer up a prayer to Anne Frank and go once more unto the breach, only occasionally having to shove a whole handful of chips into our mouths and look casual.

We played OK. No one was particularly nervous, but as the tour went on we definitely got looser. Seems to take a few shows no matter what before we feel like we’re ourselves. The awesome thing about these shows was that very little of their audience knew who we were. So after the first song maybe some polite applause, a little more after the second, and slowly but surely you could feel the audience swinging around to our side, giving us a pretty good shout by the end. It’s an amazing feeling I tell you; didn’t happen every night of course but often enough to be encouraging. I mean really, the Whigs audience treated us great the whole time.

Now I haven’t seen the Afghan Whigs since back in the day and since I am not a born and bred Cincinnatian I didn’t even see them until the “Gentleman” tour. They were always good but nothing prepared me for how much better they are now. I stood off to the side and stared slack-jawed the whole show. Greg has never sounded better. I think he’s finally singing like he always thought he was. Listening to Curley night after night was like going to school. I should’ve gotten continuing ed. credits.  He somehow manages to keep driving the groove while still being very melodic. Just a joy to listen to every night. I watched most of every show on the tour and I wasn’t even close to tired of it by the end.  I’ll talk about the rest of the band later.

And that was it. First show over. We got yelled at some more, (“You need to not park behind the bus ever again.”) and loaded out. Then we sat in the van (hence all the quotes from around the van) for around an hour and a half waiting to get paid and watching our shot at a decent nights sleep slip away like sands through the hourglass these are days of our lives.*  Ask Rene sometime about why it took so long to get paid, not my story tell but a good one.  We get back to the hotel and configure ourselves for the night. It was a tiny room being an old hotel right in the Quarter. We had three people in the king sized bed and one on the rollaway. Chuck and Lisa had bought two blow up mattresses that day and Lisa had wedged hers in the little foyer next to the door. Chuck was wedged between the bed and the air conditioner. John however is not a late sleeper and gets squirrelly in the morning. So he tried very gently to open the door and escape. Lisa said she felt her mattress rise up in air on one side until she rolled up against the wall. When the door closed the mattress quickly began losing air until she was on the floor. The son of a bitch had a hole, lasted less than 24 hours in Wussy world. Then it was time to get up and bust ass to Atlanta.

* My grandmother’s favorite “story.” It was a good time to visit because she’d be on the couch with her notebook that had the weather and any visitors for that day written down going back for time immemorial. Ah, I miss them so much.
Posted by Mr. Loudpants at 7:56 PM 1 comment: