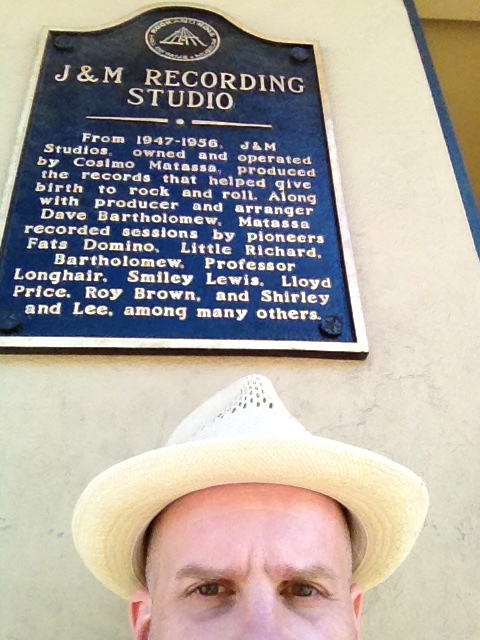 The hat and the studio. (It's a very nice hat)

*Well I won't go that far. Didn't see no Rattle and Hum sessions here know what I'm sayin'?
Posted by Mr. Loudpants at 8:41 PM No comments: 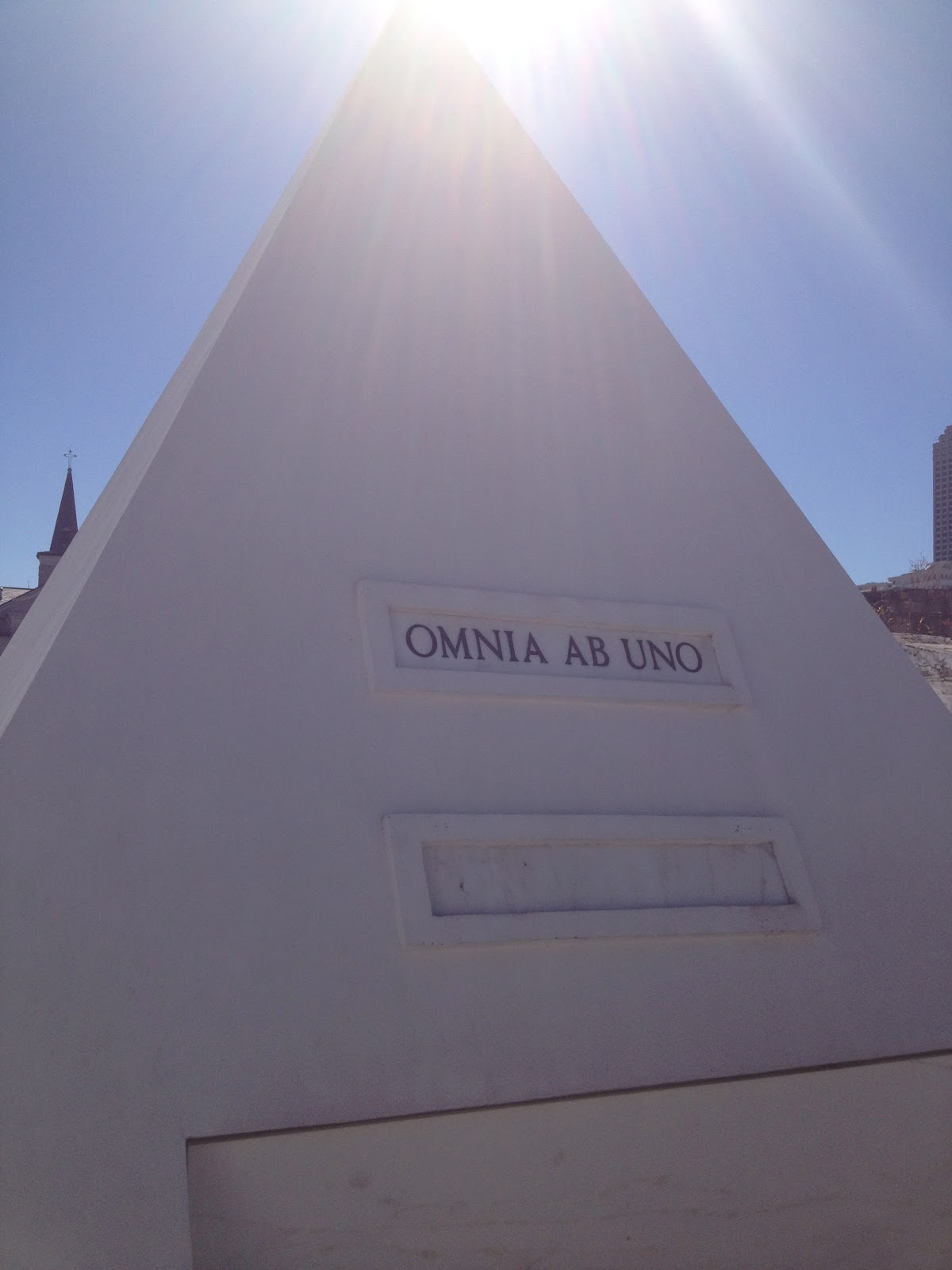 Nicholas Cage's tomb.The only thing he didn't have to sell in New Orleans.

*translates to "No Accounting for Taste."
Posted by Mr. Loudpants at 8:38 PM No comments: 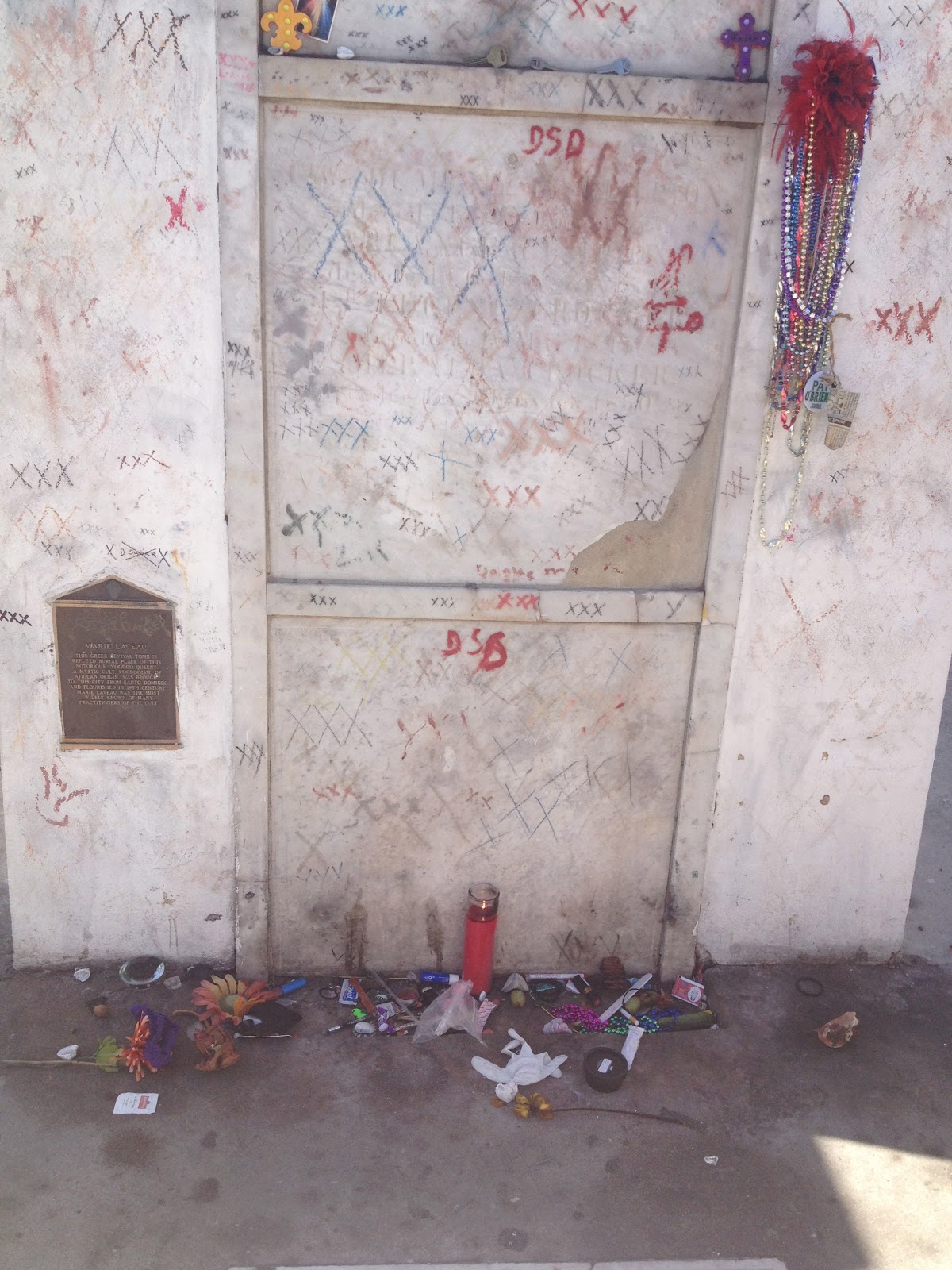 Maria Levaeu's tomb with offerings. You tap on the tomb three times, spin three times, make your wish, trace three x's on the tomb, leave an offering, and then your wish comes true. Tour guide said that last year somebody left a $50 bill there and nobody touched it for months because you do not want to piss off a voodoo queen.
Posted by Mr. Loudpants at 8:35 PM No comments:

“665 – the neighbor of the beast.” – My son. I had texted him that we were in room 665 and that the devil was next door. That was his response. He’s already smarter than me.

“Mom he has a flesh moustache.”  - Chuck telling his mother as a child why he didn’t like Bob Braun (local Cincinnati celebrity with his own show. I still don’t know what the hell they’re talking about. Apparently Lisa thinks William H. Macy has one too.)

(quick aside – all the remaining quotes are from random people who just came up to us in New Orleans. I’ve never been anywhere like where this happened as much. I’m just sharing the memorable ones but this happened all day; people randomly walking up to one of us, saying something strange and walking off. None of them became a nuisance or asked for anything. Awesome in a disconcerting way.)

“Can I fit a car battery into a pipe?” - Man at Coop’s Place Restaurant
“ It would have to be a big pipe.” Rene (tour manager)
“Yeah. (pause) That’s something I’ll have to consider.”

He was at a table with a group of about 6. He got up from the table, walked over to Rene, asked the question and then went and sat back down with no fanfare or response from his group.

“We’re assholes, and when you act like assholes you’re going to have asshole things happen.” Nice Biologist lady
(Maybe my favorite post show conversation ever. A former Cincinnati native who is a marine biologist working on the gulf coast. This statement was her assessment of humanity. It is obviously a dire, if not entirely accurate view and one shared by every biologist I know. They know first hand exactly how bad we’ve screwed the earth and they all say it’s not going to get better. Habitat is going to continue to shrink or be fouled. Species are going to continue to be marginalized and die off. The earth will bounce back just fine. You know, after we’re gone. Her specialty is mercury poisoning being transferred to birds via fish. She works on oil spills as well of course. She also told me that pelicans do not go blind after a lifetime of diving into the ocean after fish. Those urban myths are pernicious things.)

“Well both bands are from Ohio and there’s nothing to do there so everyone’s in bands.” Two woman overheard smoking (cigarettes) (they were hideous) (hence the caveat in case you got the wrong impression) outside the van.

(I’ll paraphrase these next two the best I can. Just assume that both stories rambled on in the same vein for much longer. Because they did.)

“I’m from Buffalo I know what you mean.” Woman at the merch table referring to my “Ohio Against the World” shirt.

“Oh yeah, Buffalo and Ohio are a lot alike.”

“All snow and cold. Miserable.”

"I’m from northern Ohio, I get it. Always gray…”

“People were worried that there was something wrong. But she won. My sister won. She found a doctor who said everything fine. You know, there’s nothing wrong with her, she just has a big head.”

“Well, nothing wrong with a big head…..”

We stare at each other a bit.

“Ummm…. So what does that have to do with Buffalo?”

“She lives in Tallahassee.”

Next story. I’ll paraphrase the best I can. He talked fast and in the cadence of a wack-a-mole.

We were sitting in the van waiting to get paid. Well after 2 in the morning. Guy walks up to the window and motions for John to roll the window down.

“Did you see the show? Wasn’t it fucking great?”

“Oh yeah?” (said in a way that to the skilled interpreter of social skills would obviously indicate no interest whatsoever in pursuing this conversation)

“So there was this time where I was suicidal. Long time ago and the Afghan Whigs saved my life. My girlfriend had broken up with me, like standing on a bridge suicidal and I went to a therapist and he said I was full of shit so I went to the Carmelite nuns and they gave me holy water. So it was like two years later and my girlfriend was dying of cancer. I mean she’d had two or three boyfriends since but I was shaking the holy water on her and she was like, “What the fuck are you doing?” And I said, “I’m doing what the nuns told me!!”

The whole time Joe had been laying down out of sight on the first bench in the van giggling. At this stage of the game he shouted out, “I did that too.”

The dude, with no transition stopped talking and walked away. He never said in particular how the Whigs had saved his life. I'm assuming John gave him the Heimlich. Man's a master at the maneuver.

I woke up kinda early because basically I could get a whole day in New Orleans before we had to be at Tipitinas. Started out at Café Beignet because I’m not coming all this way and not getting beignets and hot chocolate. I love this place. It’s right next to the police station and has a nice patio. A bunch of cats wander around and birds fly in and about. Lovely. Next up was a cemetery tour. Kind of expensive but I wanted to go on one with a real historian or at least not one of the many cheesebag tours. It was awesome. I went to the St. Louis Cemetery #1. If you know all about this skip ahead but if not, it’s really cool. So people are buried above ground in New Orleans because, as the tour guide put it, the water table is so high the grave holes fill up with water. You plunk the body in, huck dirt on it and hope it doesn’t rain or else you’re gonna see grandma floating down the river. (to quote the tour guide) Because it’s a Catholic town though everyone needs to be buried for at least a year and a day or they wont ascend to heaven. The solution of course is to bury everyone above ground in tombs. (a generous reading of the word bury I feel but moot in the end) Here’s the cool thing though, they stick the casket in the tomb on a shelf and it’s so hot that after the requisite year and a day the body has practically been cremated in the oven like heat. They then take the casket out, dump the remains (ceremoniously I’m sure) back onto the shelf and push them back until they fall off the end and onto a pile of relatives. Some of these caskets have people going back to 1790 in them. And if the family is still around they’re still getting buried there.

The cemetery has the second most visited gravesite in the country. (Elvis is #1) Maria Levaeu (and her daughter) is famous for being I guess what you would call the first celebrity voodoo queen. You can look her up on Wikipedia, I’m not fucking Rick Steve’s here. (although I assume he would be gentle) Anyway, people believe if you do a series of rituals at her tomb (bring your own kitten, they cost an arm and a leg outside the cemetery) your wish will be granted.  Let’s see, Nicholas Cage’s tomb is in here, (presumably his dignity, hair, and career are already buried) and it’s a beautiful, if completely sore-thumbish pyramid.

After the tour I ate a French fry po’boy. Have I mentioned New Orleans might just be the worst town in the country for vegetarians? It is. When I came down last time I still ate seafood so I got a taste of the amazing things they do down here. Still, they give Pittsburgh a run for their money in the dubious honor of putting French fries in a sandwich.

I bought a vastly overpriced hat from a beautiful goth woman whose name I’ve now forgotten. It was a cool name and I swore I'd never forget but there you are. I've also forgotten #3 Dale Earnhardt, 9/11, and where I was when Kennedy died.  I went to the site of the former J&W Studios where Fats Domino, Little Richard and a bunch of others did their early recordings. (it’s a laundromat now) I then walked across the street into Louis Armstrong Park and stumbled onto a talk being given by a priest, a rabbi, and a minster, (what is this, a joke?) (actually I don’t know their denominations but there were three holy people on a stage) about the history of the Treme’ neighborhood and singing acapella renditions of old soul songs that got turned into religious songs. This was just happening in the middle of the afternoon on a Friday. What an amazing town.

*She didn't buy anything
Posted by Mr. Loudpants at 8:20 PM 3 comments: